V3 Cast #10 is now live on our YouTube channel or wherever you get your podcasts.

In this episode, we discuss Moon Knight as well as one of our favorite classic, 80’s films, The Never Ending Story. We also get excited about Steve DiGiorgio playing on the new Megadeth album. 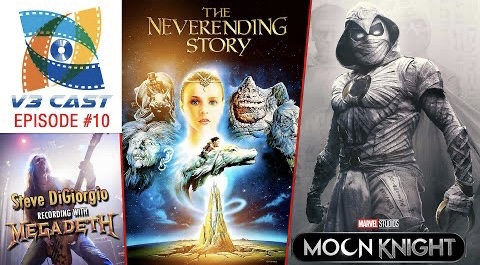 Moon Knight – Some light discussion about the new series on Disney Plus. Moon Knight follows Steven Grant, a mild-mannered gift-shop employee, who becomes plagued with blackouts and memories of another life. Steven discovers he has dissociative identity disorder and shares a body with mercenary Marc Spector. As Steven/Marc’s enemies converge upon them, they must navigate their complex identities while thrust into a deadly mystery among the powerful gods of Egypt.

The Never Ending Story – One of the top favorite films from the guys in Voyag3r. The NeverEnding Story is a 1984 English-language West German-American fantasy film co-written and directed by Wolfgang Petersen (in his first English-language film), and based on the 1979 novel The Neverending Story by Michael Ende. The film was produced by Bernd Eichinger and Dieter Giessler. It stars Noah Hathaway, Barret Oliver, Tami Stronach, Patricia Hayes, Sydney Bromley, Gerald McRaney and Moses Gunn, with Alan Oppenheimer providing the voices of both Falkor and Gmork (as well as other characters). The film follows a boy who happens upon a magical book that tells of a young warrior who is given the task of stopping the Nothing, a dark force, from engulfing the wonderland world of Fantasia.

Did you grab your cassette? A handful left. https://youtu.be/7IaIm3wlKgQ

Old Movies For Young Stoners@OM4YStoners·
15 May

@MastinUvPuppets @voyag3rband @VinegarSyndrome Just watched it with some friends over & everyone was way into the score. Great synth work punched up. with some cool guitar licks. Perfect really.

Thanks ever so much!

Just a quick "thank you" to everyone who posted overwhelmingly positive comments about the score that @voyag3rband added to @VinegarSyndrome's #newyorkninja. It was a labor of love for us and we're so glad you dug it! Hope you had a blast watching it on@TCMUnderground last night!

Catch up on our podcast, V3 Cast.