We cannot thank everyone enough for picking up all the different formats and variants of the New York Ninja film score. Since all previous cassette versions are sold out, we decided to create a 3rd color for you all. Please enjoy Shuriken Silver! Now on sale in the Voyag3r Store. Order your copy here.

This is not a pre-order, this is in stock and shipping worldwide. Get your copy now before they are gone.

Perfect for your walk-man or cassette deck on your hi-fi, get the acclaimed film score to the recently released John Liu 1984/2021 ninja film, New York Ninja. 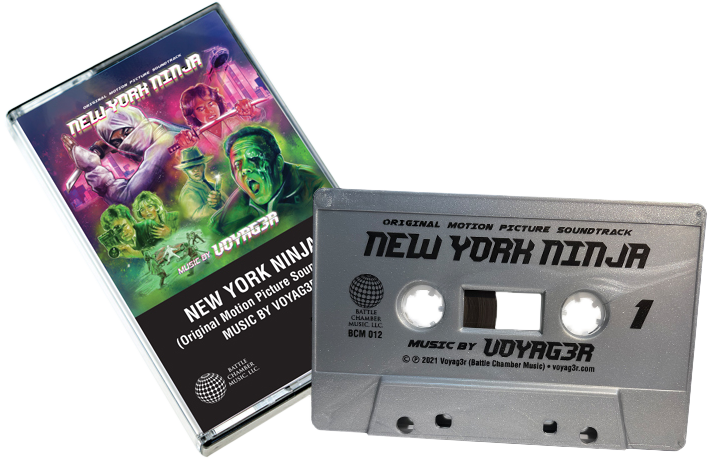 VINEGAR SYNDROME PICTURES presents NEW YORK NINJA, a wild action-comedy originally directed by and starring John Liu and produced by legendary New York exploitation producer Arthur Schweitzer. While NINJA was shot entirely on 35mm in 1984, the project was abandoned during production, resulting in all original sound materials, scripts, and treatments missing. The rights and unedited original negative were subsequently acquired by Vinegar Syndrome, who have meticulously re-constructed and completed the film.

Although writing an entirely new script, Vinegar Syndrome’s Kurtis Spieler enlisted the talents of genre film superstars Don “The Dragon” Wilson, Michael Berryman, Cynthia Rothrock & Linnea Quigley to voice the leads, he also asked VOYAG3R to compose the soundtrack, bringing their trademark sound of gritty synths, progressive rock, and pure ’80s vibes to the table, creating a dynamic, muscular score that could have easily have been recorded in 1984.

That said, this isn’t some soft copy of a forgotten era – VOYAG3R understand that a mere pastiche wouldn’t cut the mustard here. Although loaded with authentic retro sounds straight from the ’80s, the score is very much forward-thinking and firmly planted in 2021.

Some track samples can be heard on our Audio Page.